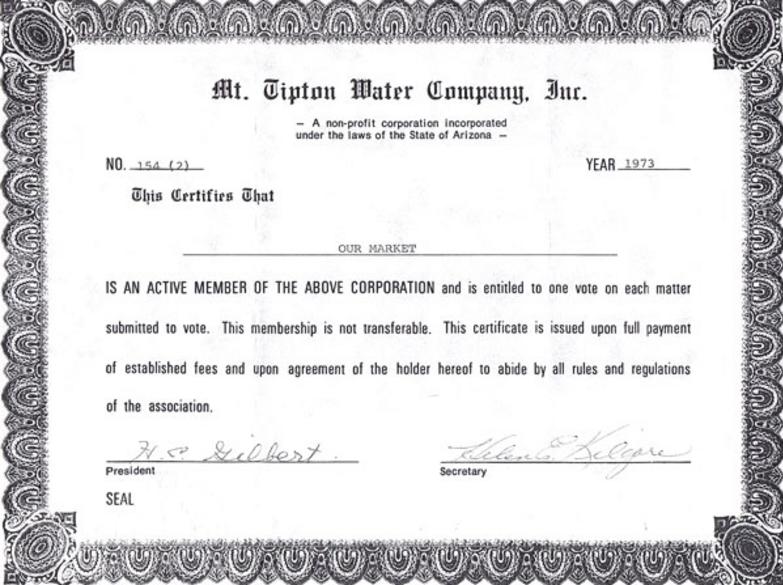 In The Beginning Water was Scarce

The water available to the White's and the entire public was an old ranch water line from Dolan Springs to the ranch headquarters, the line was tapped, and a 1-inch standpipe was installed so people could fill their jugs and buckets. This was the only available water thru out the subdivision for the first 18 months. After 3 or 4 families had moved in, I mounted a 1,000-gallon tank on a 1951 International flatbed truck and started a water delivery service at 8/4 cents per gallon. The 1951 International truck is now owned by a family on Iron Drive and is still driven on occasion. After a year and a few more families moved in I realized the truck was not heavy duty enough to handle the job and I requested permission from Corporation to purchase a real water truck for delivery service, permission was denied, the reason being that the Corporation was not attempting to develop a Community, their intent was to only sell land, upon this final word and realizing the extreme need I took it on myself to go to Phoenix and purchase a water truck at a cost of $5,000.00 and as a Corporation vice-president financed it thru Valley National Bank.

When the Corporation officers received the payment book the promptly discharged me for going against orders, however before I could move out, they rehired me. We then had an official water delivery service at Lake Mohave Ranchos and the service was in effect until 1980.

A 1 ¼ inch steel water line also ran from Dolan Springs in Section 31 and came down the Southside of Peirce Ferry Rd and angled off to the concrete cattle watering tank at what is now the corner of Inglewood Rd and Don Nell Drive then along the north side of Don Nell Drive and down to 9th Street then serviced several Cattle Waters down 9th to within one mile of U.S. 93.

When we subdivided the one-acre commercial lots known as Lake Mohave Ranch Club commercial center in Section 2 and the buyers started developing businesses we allowed them to install water tanks and we tied them into the line on Don Nell and they were allowed to open the valves every other day to fill their private tanks.

In the spring of 1962, the State Health Dept. decided we were operating as a water company without a license and at that point, our water problems began. They felt Dolan Springs in its present condition was not potable water so I constructed a concrete tank and ran the water thru this as a gravel sand system when it left the spring, this also was not accepted so I dug the bank back from the springs and constructed a block building over the springs exits and attempted to seal the door, upon the Health Depts. Next inspection they found a bull snake in the building, still haven't figured out how he got in. Anyway, at this point, I convinced Mr. Parker's supervisor, that we should drill a shallow well at the springs and drain them. This was acceptable so I contacted Mr. Graham who was drilling for a rancher and explained the problem, Mr. Graham drove over and accepted the job and for $2,500.00 and picked the drill site that should drain the springs. He completed his drilling and set the pump in July 1962, we had paid to run power from the Ranch Club to the well site and Citizens had the power ready when we started pumping it wasn't long before we realized Mr. Graham and drilled on the lower side of a dike and hit new water. We had a small 20 gallon a minute well and never touched the Springs at this point I threw up my hands and called in another driller that had the equipment to angle drill the springs and install perforated pipe and install valves at their ground exit, this is in operation today. During this same, I purchased the 80,000-gallon water tank from a friend of mine in Oatman, and 3 of us cut it up in sections, moved, and installed it back together in its present location.

In March of 1962, we were accepted as a Water Company and a certificate was issued for us to operate as such. Our problems still were not solved, folks started developing their own commercial lots so fast the 1 ¼ in line that we could no longer keep up so I, Tom White went before our MR. Parker and Mr. Vogt and convinced them we should install a storage tank locally and pipe water to the commercial later.

They agreed as it was noted, this growth certainly did help sell the property. Tom White purchased a 30,000-gallon steel tank and borrowed Mr. Hafleys semi-truck and Kingman and hauled the tank down from Henderson, Nevada. This tank was installed where the back of Mrs. Hilda De Long's home now stands; it was moved again and now stands on 11th Street beside the 63,000-gallon tank. I also used the old 1951 International one-ton truck and moved in the 2, 5,000 gallon and one 6,000-gallon water tanks up on the bank in front of Tom White's house. (and they are still in service.) To move these tanks on a small truck I dug a ditch beside them with a blade, backed the truck in it, then drug the tanks onto the truck and lashed them down. The truck was so tail-end heavy the front would leave the ground, so I backed the blade up against the truck and tied it down; I then towed the truck to hold it down.

One of these tanks Tom moved in from what is known as Grassy Flats and this is not far from this present Boulder Inn. I was loaded at approximately 8:00 P.M. and left towing this truck and tank, it was light of day before I arrived home with the tank.

When these tanks and a pressure pump was set by Tom, he let a contract to Mr. Norman Frazier of Phoenix in the fall of 1962 to install an adequate pipeline system to the Commercial Center. The estimate of this contract was $5,300.00. After this thing operated rather smoothly for a couple of years then Tom White began to see a water shortage problem. In 1964 Tom began discussing this with Mr. Parker and Mr. Vogt and they had a deaf ear.

In the summer of 1965, Tom had to make arrangements to purchase another water truck from a friend on the west side of U.S. 93 in Section 3, after getting through the summer Tom knew we could not get through another summer as there were too many users.

After repeatedly being turned down for funds to drill another well Tom figured the only thing left would be to go to San Bernardino, California, and meet Mr. Parker one-on-one.

Tom drove through that night and was at Mr. Parker's home at 8:00 A.M. the next morning. He found he and a guest in the pool and marched up and told Mr. Parker he had driven over for a $5,000 check to drill a well as this was the bid.

Mr. Parker refused so Tom told him the development was hopeless therefore nothing was left except to resign and quit on the spot and walked through the yard to my car. As I was entering my car Mr. Parker walked up and said you really mean it I said yes, and MR. Parker said alright go to the office and he would have a check waiting for me. In the spring of 1966, the well was drilled in section 35 and cut into service.

Nothing was done after this until 1970 when Tom White subdivided Dolan Springs Estates into 1/3-acre tracts and piped water to each property.

Water Companies Sue Each Other
View on Mobile