The first church constructed in Lake Mohave Ranchos was a Baptist church, and this was on 6th Street off on west of Cattle Drive.

The company had Tom White give them 5 acres in the fall of 1963, and control was held through the ministry in Kingman.

After the land gift, a plea went out to all residents and corporations for cash donations and volunteer labor for construction.

Once again, the corporation gave money, this time $500.00, and it was declared an expense against the Ranch Club operation. AS stated earlier, Tom White received a set salary plus a bonus of a percentage of the net, not including club memberships. My bonus before the cash gift would have been $3,000.00, and with them taking this expense, my bonus was $2,500.00 for the year of 1963, this means Tom White usually gave the cash, not the corporation. I was not bitter over this, for I felt the need of a church for Lake Mohave Ranchos.

The church held services in the building in January 1964, and everyone was happy, including Tom White and his family.

The thing that did make Tom White unhappy was a few years later, the Baptist ministry and Deacons sold the church and property to Mr. Rudy Rieman and why?

No one knows, and it was upsetting.​ 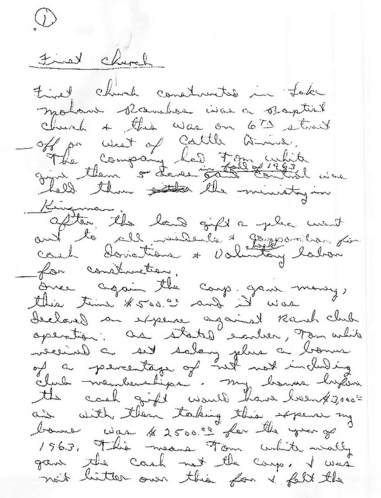 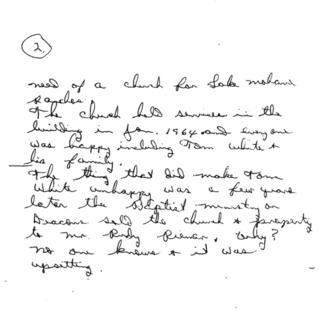