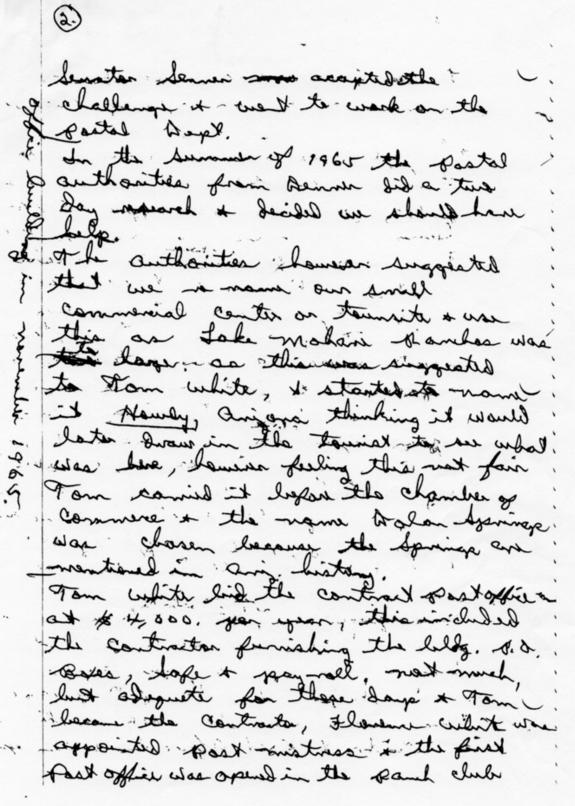 The only mail service available to Lake Mohave Ranchos until the Spring of 1961 was a Post Office Box on General Delivery in Chloride. In 1961 Tom White convinced the Postal Dept. in Denver that we had grown enough to into a rural mail service. They allowed us to install Route boxes at the intersection of Highway 93 and Pierce Ferry Rd this served us until 1963.

Tom White once again convinced the Postal Dept. we should have better service, at this time they allowed us to move our boxes in front of the small building on the club property, everybody between U.S. 93 and town could have road side delivery.

An acquaintance of Tom White Mr. had been voted in as our Arizona U.S. Senator one of his committees was the Postal Dept in the fall of 1964.

Tom White went to work on him for a contract Post Office in Dolan Springs.

Senator Seaman accepted the challenge and went to work on the Postal Dept.

In the Summer of 1965, the Postal authorities from Denver did a two day research and decided we should have help.

The authorities however suggested that we rename our small Commercial Center or town site and use this as Lake Mohave Ranchos was to large as this was suggested to Tom White, I started to name it Howdy, Arizona thinking it would later draw in the tourist to see what was here, however feeling this not fair Tom  carried it before the Chamber of Commerce and the name Dolan Springs was chosen because the Springs are mentioned in Arizona history.

Tom White bid the contract Post Office at $4,000 per Year this included the contractor finishing the building, P.O. Boxes, Safe and payroll, not much, but adequate for these days and Tom became the Contractor, Florence white was appointed Post Mistress and the first Post Office was opened in the Ranch Club office building in November 1965.